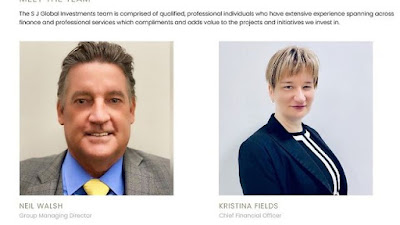 Surprise, surprise - someone has got ripped off again by the crooks who pretend to be businessmen/women at S J Global Investments and on the other hands charity givers at the Umbrella Foundation in Norwich.   This time the police in Scotland are investigating Neil Walsh (no known professional occupation), Kristina Fields(seller of vitamins) and Paul van der Hulks (local wedding snapper in the Norwich area)after a Glasgow-businessman, transferred £50k to the 'charity' for onward forwarding to another dodgy entity called Genesis 11 - which already has a UK Financial Conduct Authority warning as a scam.   And where a whole load of people have lost money via Neil Walsh, S J Global and the Umbrella Foundation.   The detail of the latest fraud has appeared in the Norwich Evening News - merely because many of the dodgy companies, are registered to a dirty mailbox in an office in the City there. Here is the Norwich Evening News Story Norwich charity shuts down amid £50,000 scam al
Post a Comment
Read more

August 05, 2020
Read about the fraud allegations here EVEN IF YOU DO NOT BELIEVE WHAT IS DESCRIBED HERE THERE IS ONE MAIN INDICATOR OF CROOKERY All investment businesses in the UK have to be registered with the UK financial regulator the Financial Conduct Authority - which gives investment advisors a registration number.  THIS COMPANY IS NOT LICENSED BY THE FCA AND IS THEREFORE OPERATING ILLEGALLY Also check their accounts at Company's House and you will see that they don't (a) even have money or (b) a single employee.  Its all a scam.
4 comments
Read more
January 14, 2020 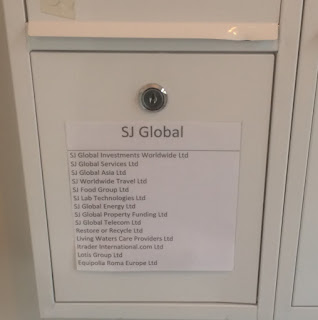 S J Global fraud allegation in which company claimed access to $100m of funds from the Qatari Royal Family This small Norwich office is home to a firm accused of being part of an alleged international fraud which saw millions of pounds wiped off the value of a chain of burger restaurants, court documents allege S J Global's office is a mailbox in Norwich US fast food firm FAT Brands, which owns the Fatburger franchise and 400 restaurants across the world, is accusing a company registered on Prince of Wales Road of being involved in a "criminal scheme" - something the company and its directors deny. The company, SJ Global Investments Worldwide Limited, along with two of its directors and owners, Kristina Fields and Neil Walsh, are named by FAT Brands in a lawsuit filed in a New York district court.  Eight other companies and individuals are also named in the lawsuit as defendants. Read more here  in Eastern Daily Press newspaper and here at the Rip
2 comments
Read more